Skip to content
Recently I watched a superb play about homosexual UKIP members-yep! And within a few days of that I had an interesting Facebook chat about the woman Trump has appointed Deputy National Security Advisor (never thought I’d be typing ‘Trump’ & ‘National Security Advisor’ in the same sentence unless it was in the context of a scandal!).  Anyway, the article we discussed was about her not speaking to her gay brother, even when he was dying (!!!), because she disapproved of his promiscuous lifestyle.
What’s been fascinating re the play is how surprised many people were to see that homosexuals can be right-wing, & even right-right wing, & even downright racist! Some people assumed, as many of us do, that once you’ve experienced adversity because of prejudice you’ll be predisposed to extend empathy to others.  Hmm, a beautiful ideal but come on, we human beings could make Othering** an official, planet-wide sport! So with regards to racially intolerant homosexuals-who had experienced homophobia from some ethnic minorities & thus felt threatened & resentful at their presence in Britain-do we condemn them for their racial views or praise them for their work for sexual equality? Or can we-please-allow space for both?

Hates you vs Hates your views
Image: Quickmeme.com

While these guys have complex, competing tolerant & intolerant views, Trump’s mate does not…well, actually maybe she does-you tell me.  She was understandably criticised in gay media outlets for her terrible behaviour to her brother but what caught my eye was the fact that her behaviour was implicitly linked to her being inappropriate for her job. Why? Her actions show she was-& maybe still is-a terribly disloyal, judgemental, unforgiving & unkind sister, but what’s that got to do with her job? If her private views don’t affect her work: why is this family fall out news? Isn’t this part of the same argument we’ve been making in support of homosexuals (and singles & divorcees before them) receiving the same basic respect & rights as heterosexuals? ie. If it’s private & not affecting their work leave them alone!
Now her behaviour is abhorrent to me but, as a liberal-ish chick, I believe we should be free to be as (legally) arsehole-ish in our private lives as we want to be!  And when you are, I’ll ardently discuss, blog, & petition for you to change your views & behaviour.  But I won’t condemn you for your them. (I may not be friends with you though…your loss!)
** Othering: labelling someone whom you regard as belonging to a lesser social group as ‘the Other’.
*Liberal: 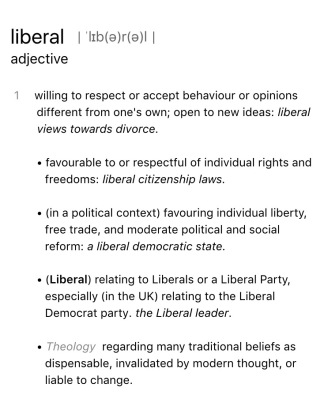 I'm Natalia...I'm a passionate thinker, speaker and writer who loves discussing ideas and issues - about life, purpose, society, culture, education, justice et al.. So here's my space to write about them. View all posts by womanupblog